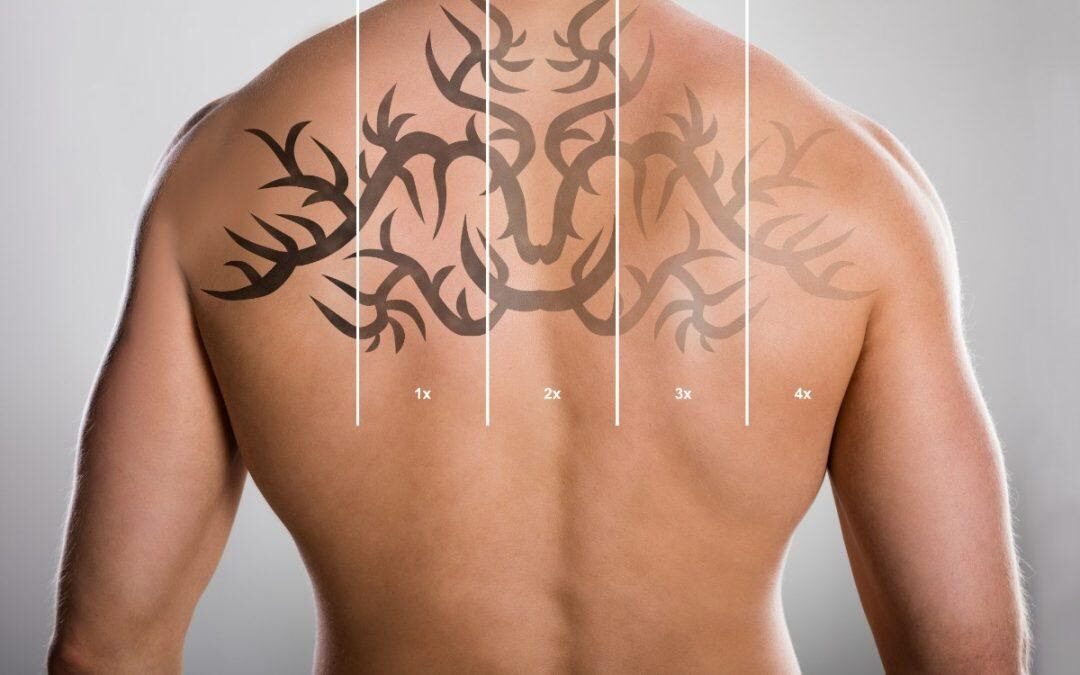 One in seven Australians are sporting a tattoo according to a study conducted by the National Health and Medical Research Council (NHMRC) in 2019. With this increase in numbers of Australians choosing to have a tattoo comes an also increasing number of people who have “tattoo regret” with some estimates as high as 50% incidence of people with tattoos wanting them removed at some time via laser tattoo removal.

The reasons for wanting tattoos removed are varied. A common reason is that a tattoo done when younger becomes out of place and not as socially acceptable as one gets older; it may be that the tattoo simply didn’t turn out well and is not what was requested or expected; it may be that an ex partner’s name is no longer wanted; or it may be that someone wants a tattoo to be faded or part of it to be removed so a new tattoo can replace it (tattoo remodelling). Whatever the reason there is no doubt tattoo removal using laser technology is the most effective option.

Will the tattoo be gone in one treatment?

The first thing to mention about tattoos is that removal is a process over time that will take multiple treatments. The inks that tattooists use are “large particle inks” which makes it hard for the body to naturally breakdown. The best option for the quickest and most effective removal is the use of medical grade lasers which effectively shatter the tattoo ink into very small particles which can then be absorbed and removed by the body.

How many laser tattoo removal treatments will I need?

Whilst everyone always wants to know how many treatments it will take to remove a tattoo we can never exactly predict. This is because we never know which exact tattoo ink was used, how much ink was used and how deep it was inserted. Generally, the better the job the tattooist did the harder the tattoo is to remove. Amateur tattoos are usually much easier to remove than professional tattoos. Multi coloured tattoos usually take more treatments than single coloured tattoos.

The number of treatments will also vary with the level of clearance wanted. Some people want every bit of ink removed others want to fade the tattoo until it is not as noticeable and others just want to lighten the tattoo so they can put a new tattoo over the top.

Professional tattoos can take 10-15 treatments whilst Amateur tattoos may only take 3-4 treatments however, this can never be guaranteed.

Which tattoo removal laser is best?

In our opinion the safest type of tattoo removal laser whilst still being highly effective is what we call a Q-switch laser which means there is a switch mechanism in the laser that allows the laser beam to be delivered in a very short pulse called a nanosecond (10-9 second). The short pulse means the laser has more of a shattering effect on the tattoo pigment rather than just burning the skin.

The premium medical grade Q-Switch laser is the REVLITE system manufactured by the US Company Cynosure. The REVLITE is a Class 4 laser that has significantly more power and is more reliable than many Q-Switch lasers produced in unregulated markets such as China. The REVLITE also has a special dye filter system that allows the laser to deliver 4 wavelength options (1064nm, 532nm, 585nm and 650nm) which gives it versatility to effectively treat a wide range of tattoo colours as well as black.

How does laser tattoo removal work?

The lasers used in tattoo removal direct a single wavelength of light onto the skin. This laser light is attracted to the pigment in the tattoo. A tattoo remains in the skin by having a large pigment molecule. The laser shatters the pigment into smaller fragments that are then able to be absorbed by the body’s macrophages (a white blood cell that engulfs and clears foreign particles from the body). Some inks are easier to remove than others. Black and red tattoos are the easiest colours whilst aqua and greens are the most difficult. The reason some colours of ink don’t respond as well is that the available wavelengths or colours of laser light aren’t attracted to them as well.

Is there a risk of scarring?

Whilst the risk of scarring with the latest generation Q-switch lasers is very low it is not zero. With the latest generation lasers, the incidence is around 1-2%. Aftercare is important – if you traumatise healing skin it increases the chance of a skin reaction. It is important not to pick or scratch at crusts or break any blisters. Certain skin types heal quicker than others.

If people find they heal very quickly when they cut or scratch them selves, they have a much lower chance of scarring than if they find every time, they knock themselves the skin heals slowly. Dark skin types like Pacific Islanders and African skin types scar more easily than lighter skin colours. Some body areas like the neck and cheek are more sensitive than other areas like the arm and leg and may require lower power on the laser to reduce the chance of a skin reaction.

At GVSL we are a medical clinic with onsite doctors who can consult you about the risk of scarring, or manage any issues that occur with prescribed medications and/or cortisone scar injections.

What does the scarring look like if it were to happen?

It can vary from a slight roughening or shininess on the skin to a thickened raised scar. In patients who develop any scarring it is usually so faint that they feel it still looks a lot better than the original tattoo.

Are there any dangers from having tattoo removal laser?

You do need to wear protective eye shields as the intense laser light can damage eyes if you stare at it without protection. There is no ionizing radiation from the laser so it doesn’t affect the DNA of the skin and definitely doesn’t increase risk of any skin problems like skin cancers.

What is the best timing between treatments?

We usually space the treatments about 6-8 weeks apart. It doesn’t matter if it is longer. In fact, there can be some fading from a treatment up to 3 months later.

These lasers are uncomfortable and can definitely be felt. Most people compare it to the sensation of getting a tattoo. The majority of patients don’t require any aesthetic however if you find it too painful a topical aesthetic cream can be used. As a medical clinic there is also the option of having our doctor see you on the day of tattoo removal for injected local anaesthetic to completely numb the area prior to laser. Pain management will be individualised to your needs.

What is the cost of laser tattoo removal?

For a complimentary initial consultation and quote please call Geelong Veins Skin & Laser on 5229 6866 or email photos of your tattoo to reception@geelongveinsskinlaser.com.au